7 reasons why I said YES to my husband 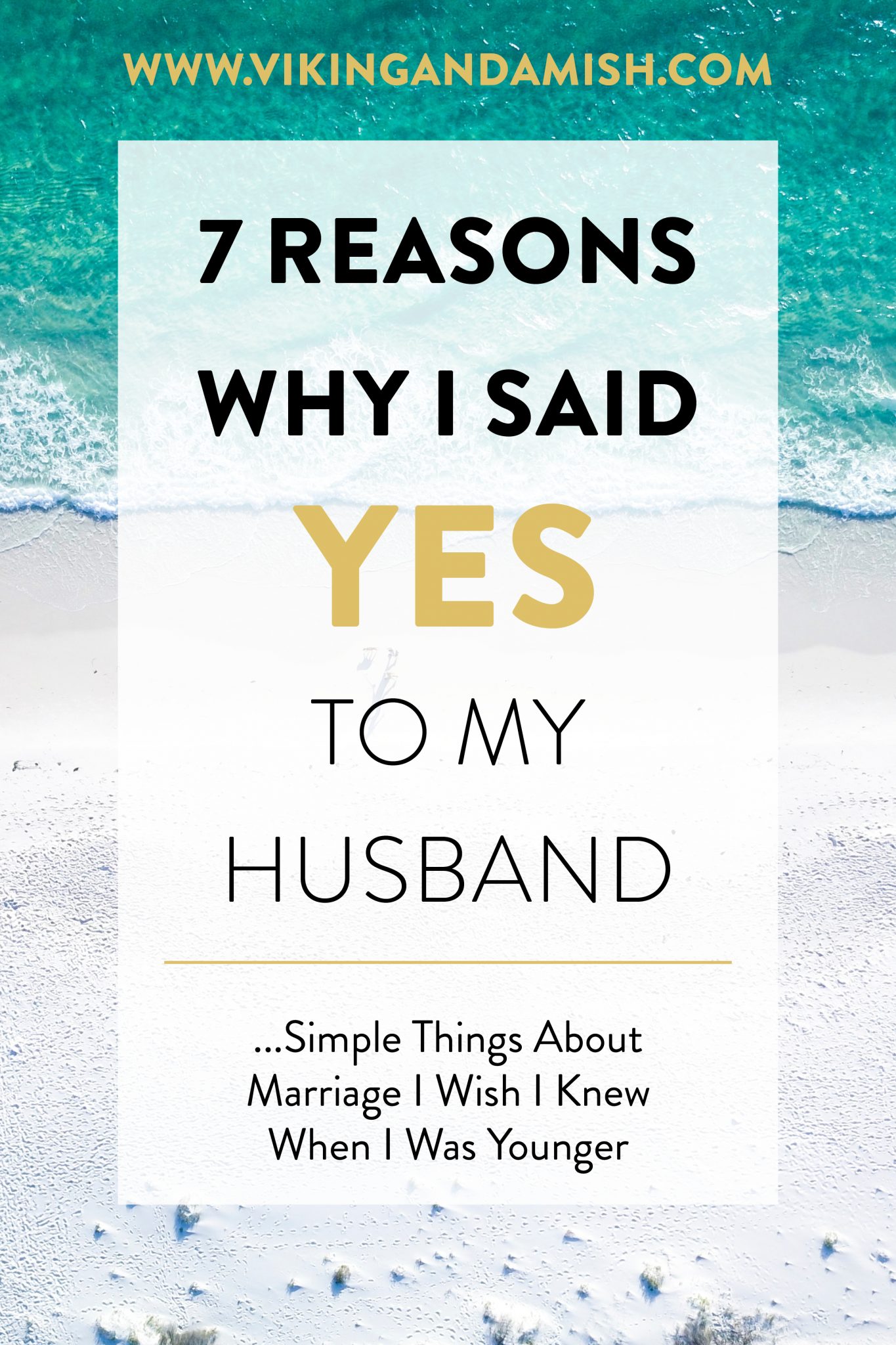 I always hope my posts are helpful and a blessing to my readers, but to be entirely fair: This post, I am writing to my younger self. We are all unique beings with a very complex and complicated character, personality and soul. Before I met my husband, I didn’t know myself as well as I do now. Meeting him and knowing him has helped me understand myself better, and that is why I wish I would have read a post like this earlier.

Just as a disclosure; I am not writing this post because I believe I know everything about marriage. I am still in the wilderness and wonder of many things, but as I stated, I wish someone would have told me these things when I was still single and hoping to find a good man.

I only dated a few guys before I met my husband, plus I have only dated Christian men. Him being a Christian was a must for me. But that was just the first thing, that the man I was going to spend my future with, had to check off the list. Though many of the men I dated in the past are all good men, at the end of the day it didn’t work out for many reasons.

A few months before I met my husband, I met another guy, also Christian, who very intensely pursued me. He was very charismatic and wanted to jump into a relationship faster than I was willing to. While holding back the temptation to rush the relationship, I began to see things in his character I knew were going to be a problem if we started dating.

I don’t want to speak ill of him, but my point is that because I hesitated and took time to “see” his character, I realized quickly that we were not a good match.

BUT Then I met Jeff

I met Jeff at a New Year’s Party and from the moment he stepped in the door, with his silly shoes on, I knew that he liked me. I later found out that he had seen me before and had only dreamed of being able to talk to me, so it was a surprise to him, that I was even at this party.

I don’t want to bore you with our relationship up until we got engaged, but I want to tell you why I didn’t hesitate to say “yes” to this man.

1. He asked me to spend the rest of my life with him, not just marry him

You have to understand—Jeff was married once before. Though I rarely ever sense scars or any left over from that marriage, I knew he didn’t want to “just” get married again. From the moment Jeff bought the engagement ring, he committed. He committed to stay together through fights, ups and downs, hardships, and victories.

Approaching marriage as a lifetime commitment

I might be old-school, but I didn’t want to marry someone that I didn’t think I would be able to love and live with for the rest of my life. Naturally, my Christian World View influences my perspective of the idea of marriage, that is how values and principles work. However, I will say that there are much more than religious reasons why we should aim to obtain long-lasting relationships.

Approaching marriage as a binding commitment will also affect the way we handle conflicts, finances, job proposals, family planning, and other major decisions in life. I knew that I was gradually going to become a better person and thus better off by choosing Jeff for life. 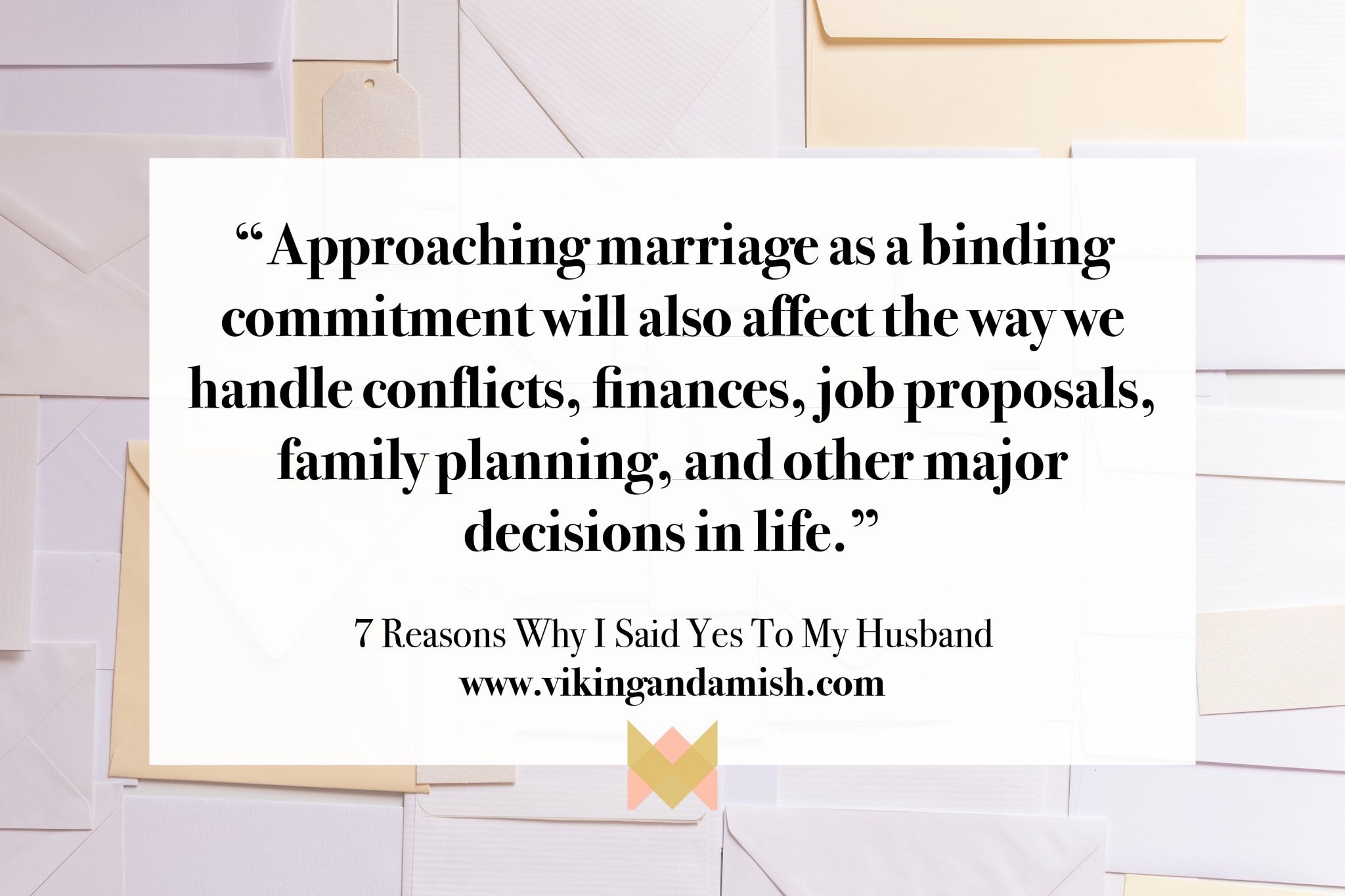 2. More than being extremely attracted to him, he had also grown to be my best friend

Growing your relationship during dating into a friendship that still contains love and attraction can take time. Even for people who started out as good friends. I know some couple’s stories—they were first friends and grew to love each other. Still, the type of friendship that marriage needs is deep.

My youngest brother is 12 years younger than me, but he is a wise young man, especially for his age. He recently told me about a friends his age. She is still a teenager, yet talking about getting married soon to her boyfriend. As he said: “It is such an important decision, marriage, and I am afraid they are rushing it. What is a year or two more dating if you think you’ve already found the one you want to spend the rest of your life with?”

3. Our temperaments are very compatible

On personality tests, I typically end up with the “managing,” or “executive” type. That doesn’t mean I can’t be upbeat and have fun, but I’m your girl if you have a problem that needs fixing. I’m the fast-moving, make-a-list and get it done type.

Jeff is very “pastoral” in a sense. Without even trying, he cares about people. He takes time to listen and connect, and if you want encouragement or hear a funny story, he is your guy. Jeff gets things done differently from me. It might take him a little more time to fix your problem, but in the process, he’ll become your friend for life.

Though our personalities and temperaments are different, we have similar values, outlook on life, and vision. The things we agree on far outweigh the things we see differently.

So, marry someone who compliments your temperament—someone who’s opposite side doesn’t lead to conflicts. Find someone who’s similarities gives you comfort. 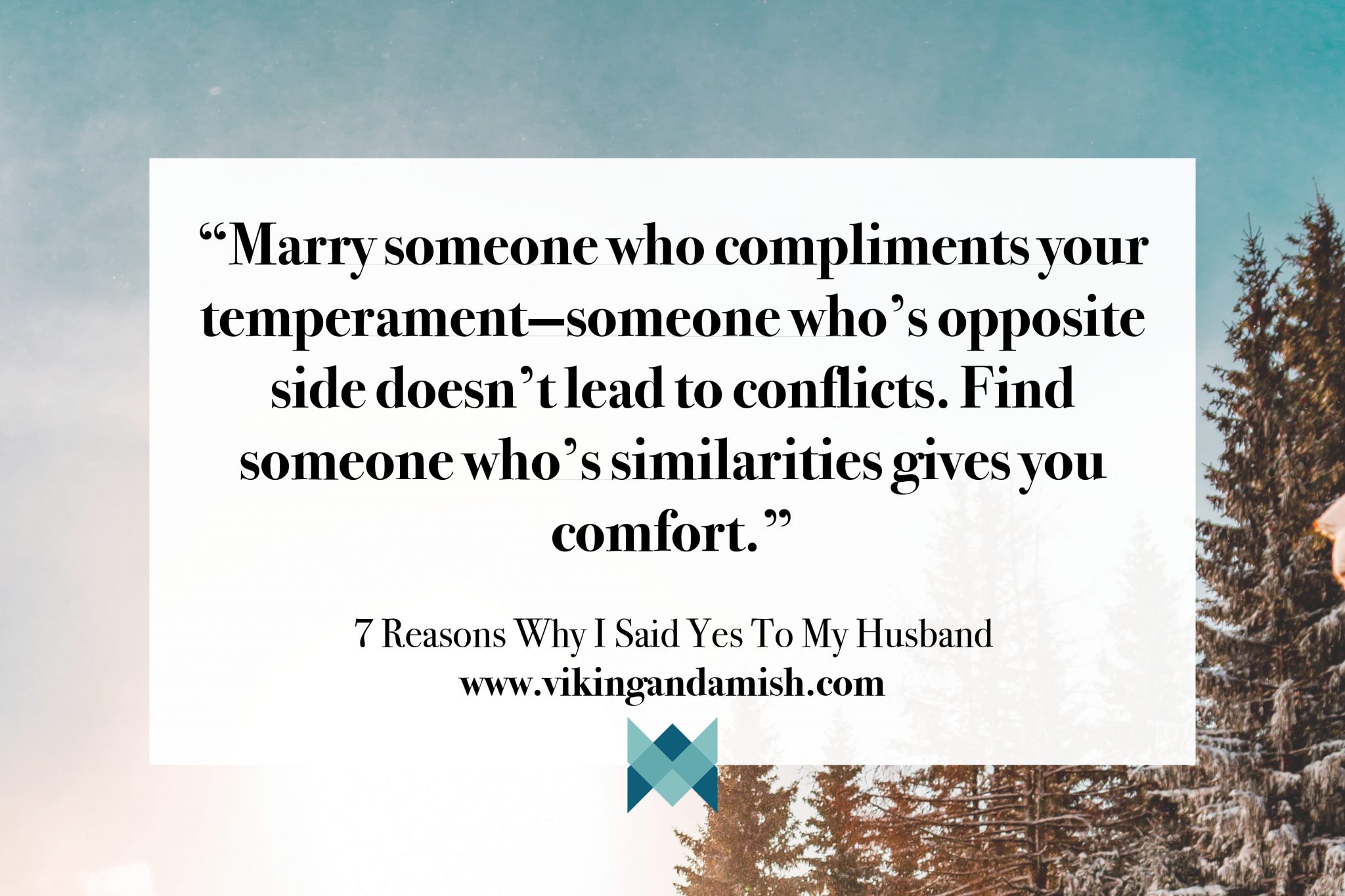 4. He is a terrible liar

This is one of Jeff’s best qualities—being horrible at lying. He is a very honest man. He has zero “game,” no pick-up lines, no mystery, which is why I knew from the moment I met him that he liked me. He simply couldn’t hide it. This also means that while dating and even now, he never messes with my head or make me second guess myself.

“Game” is not a marriage quality that will bring anything but insecurity and hurt to the table. Find yourself a person, who is not scared to be transparent, honest, and sincere.

5. My ambitions don’t threaten him and he encourages me to be my best

Being married to someone who is not frightened by you exceeding them means having a spouse that cheers you up when you are down and trust you in your victories.

Home should be where you recharge and get ready for the next adventure or challenge. If there is no encouragement or you only experience resistance to your accomplishments, your victories become hard to celebrate.

I have met many men who expect to “lead” their families. But, their understanding of leadership indicates that they must be the head, the front, the muscle, the provider, the security, and the stability of the family—all at once. Basically, there is no room for a go-getter Proverbs 31 woman in the relationship. No thanks!

Jeff often tells me that with my talent I will most likely exceed him in salary and opportunities at some point. However, that doesn’t make him bitter or make him stop trying. He still puts his head down and works hard for his own goals, and as he does that, he inspires me to do the same.

6. He is never too proud to admit when he has made a mistake

Pridefulness is poison in relationships. Pride is evidence of a deep-rooted egoistic mindset. I am not talking about things like taking pride in living up to a certain standard or doing a good job. I’m referring to the attitude of vanity and unwillingness to admit when one is wrong.

Humility and servanthood is the glue of a longlasting and wholesome union. A sincere “I’m sorry,” or “I was wrong,” shouldn’t be painful to say to our partner.

Jeff has always been good at hearing me out when I presented him kindly and lovingly with a correction or a rebuke. Likewise, he is also really good at guiding me to become the best version of myself.

I knew that saying “yes” to Jeff also required a willingness to have and receive grace as we both have character flaws that we are working on. 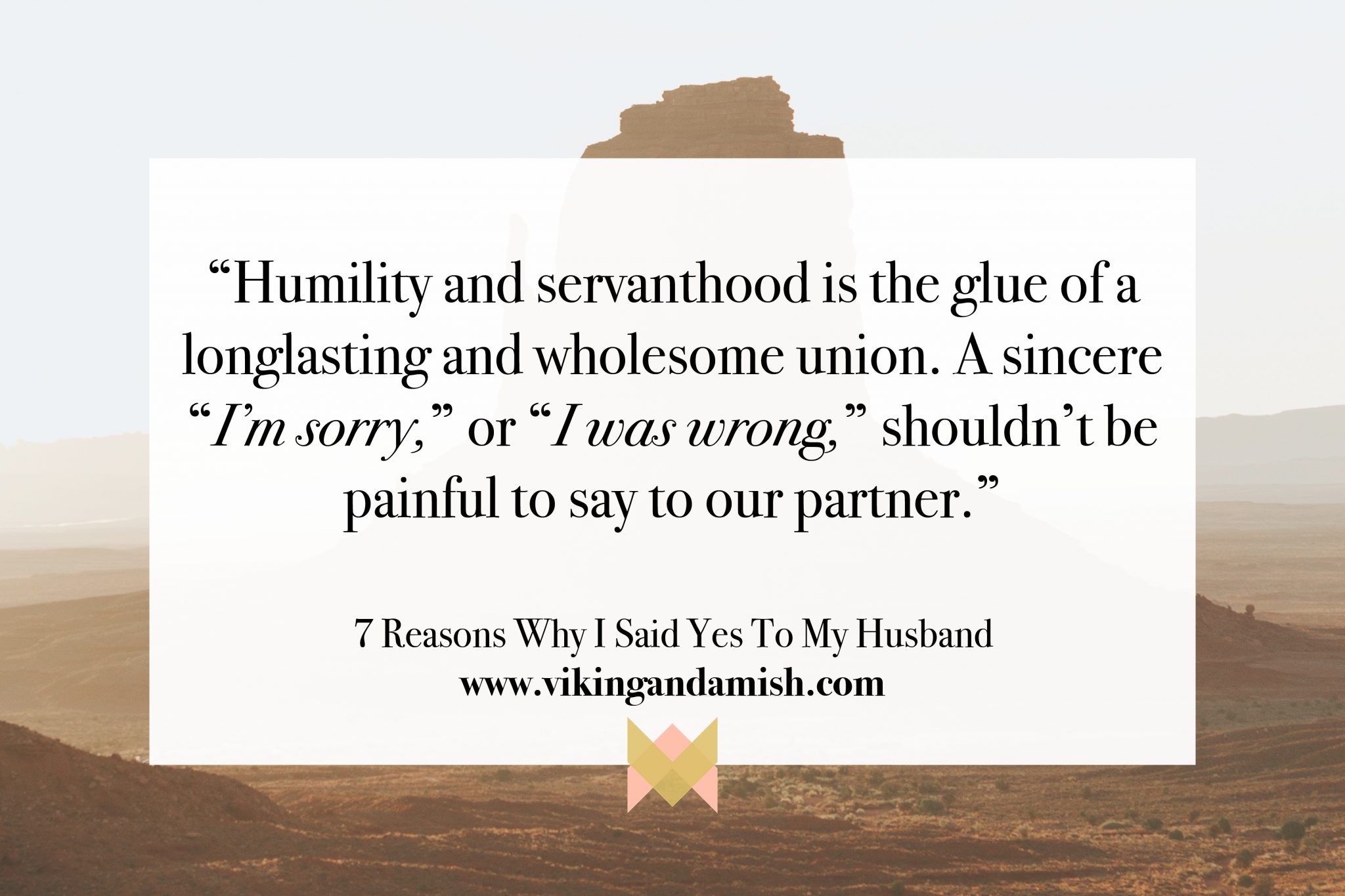 7. He has a great relationship with his mother

How your partner relates to their parent of the same gender as you, is an indicator of how they are going to relate to you. If they have a respectful and loving connection, you know that they most likely have a healthy relationship to others of the same gender.

For me, my adopted father taught me what a good man’s character looks like. Today, I have a healthy and non-problematic relationship with men, in general, because of my good relationship with my father. Similarly, Jeff respects and relates well to women.

Don’t get me wrong; every relationship can improve and become better. However, Jeff and his mother have a great relationship today. He is a big advocate for forgiving parents their parental mistakes—you know, the mistakes parents make because they are human and flawed.

Their relationship wasn’t always peaceful. Jeff made a decision after he became an adult, that he was not going to carry resentment in his heart, and thus, he verbally forgave things in his childhood that he doesn’t want to carry anymore.

Forgiveness is an essential quality in longterm relationships. You want your partner for life to have this capability.

RELATED POST:
4 Conflict Styles That Will Kill Your Relationship
3 Concepts That Make You Better At Relationships
10 Healthy Habits To Have In A Loving Marriage

Many other reasons to marry him

Thanks for showing interest in my advice for singles and dating people. I hope this post gives you comfort to know what qualities to look for in a person or assurance that you are with the right one.

Of course, this was not a COMPLETE list of all the reasons why I married my husband, nor a full list of characteristics a partner should have for you to consider a proposal. However, this is a good start or food for thought regarding what type of person you say yes to spending the rest of your life with.

If you are married and had a great reason to marry your partner, please feel free to share in the comment section below. 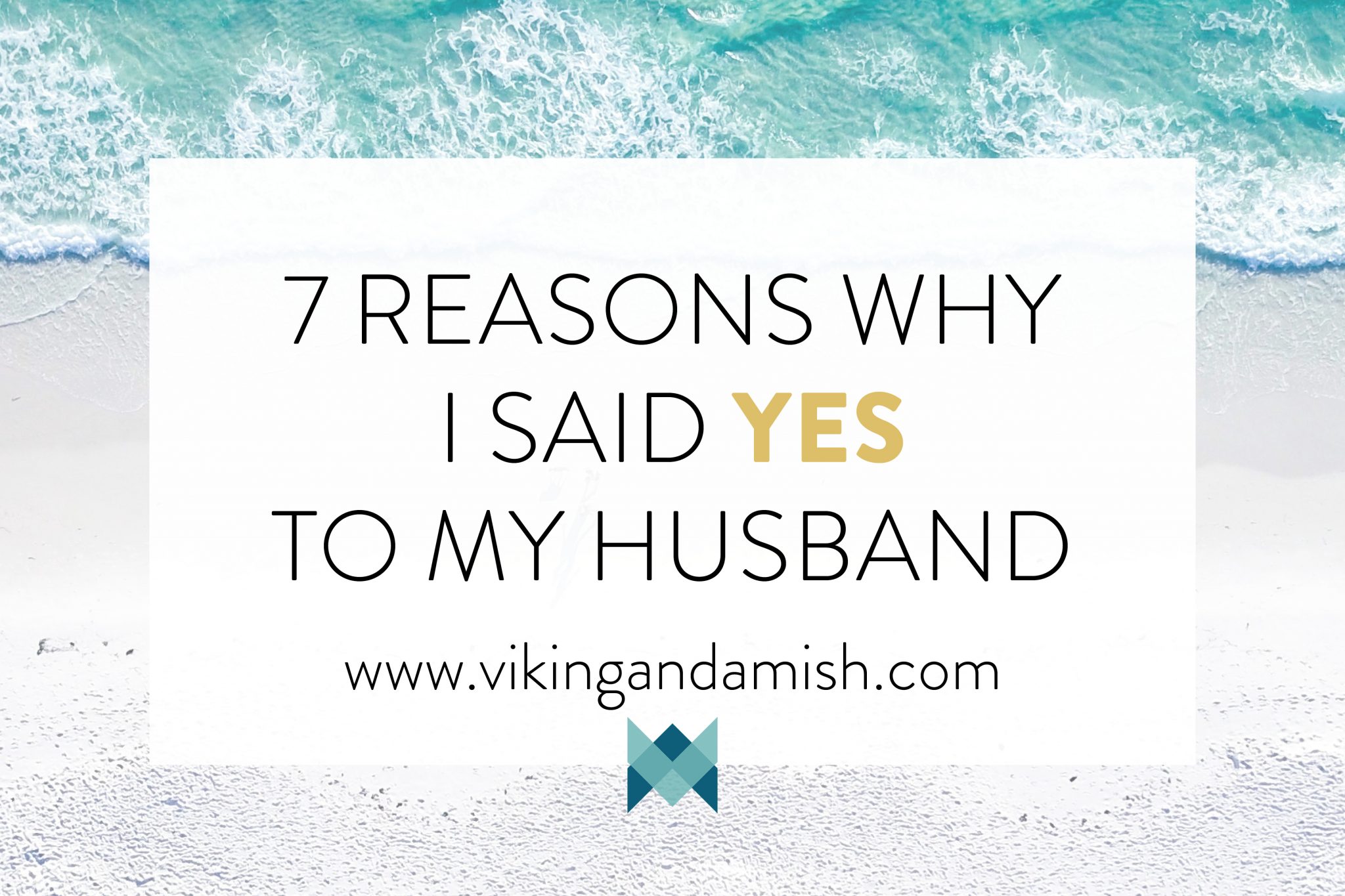 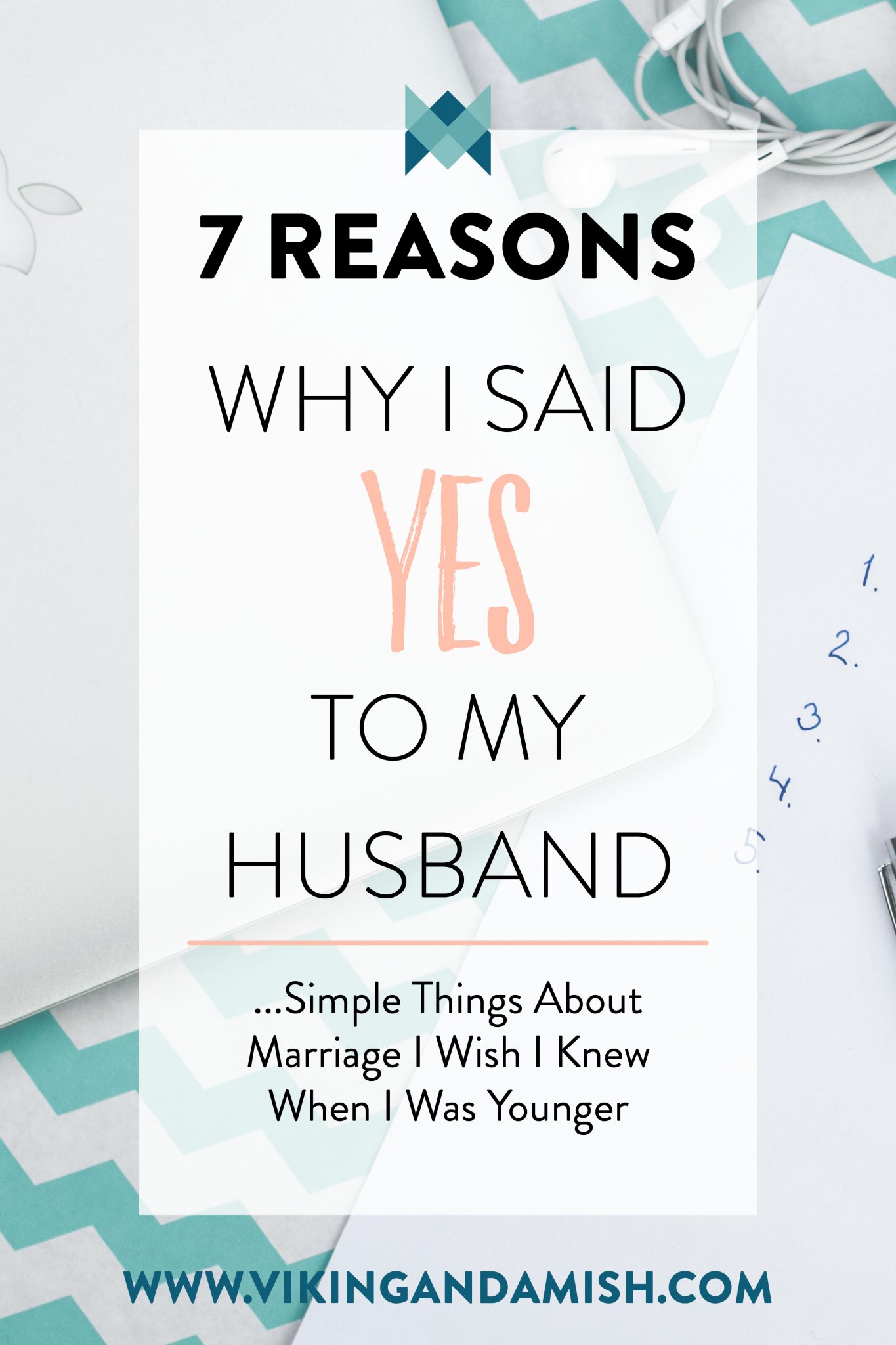 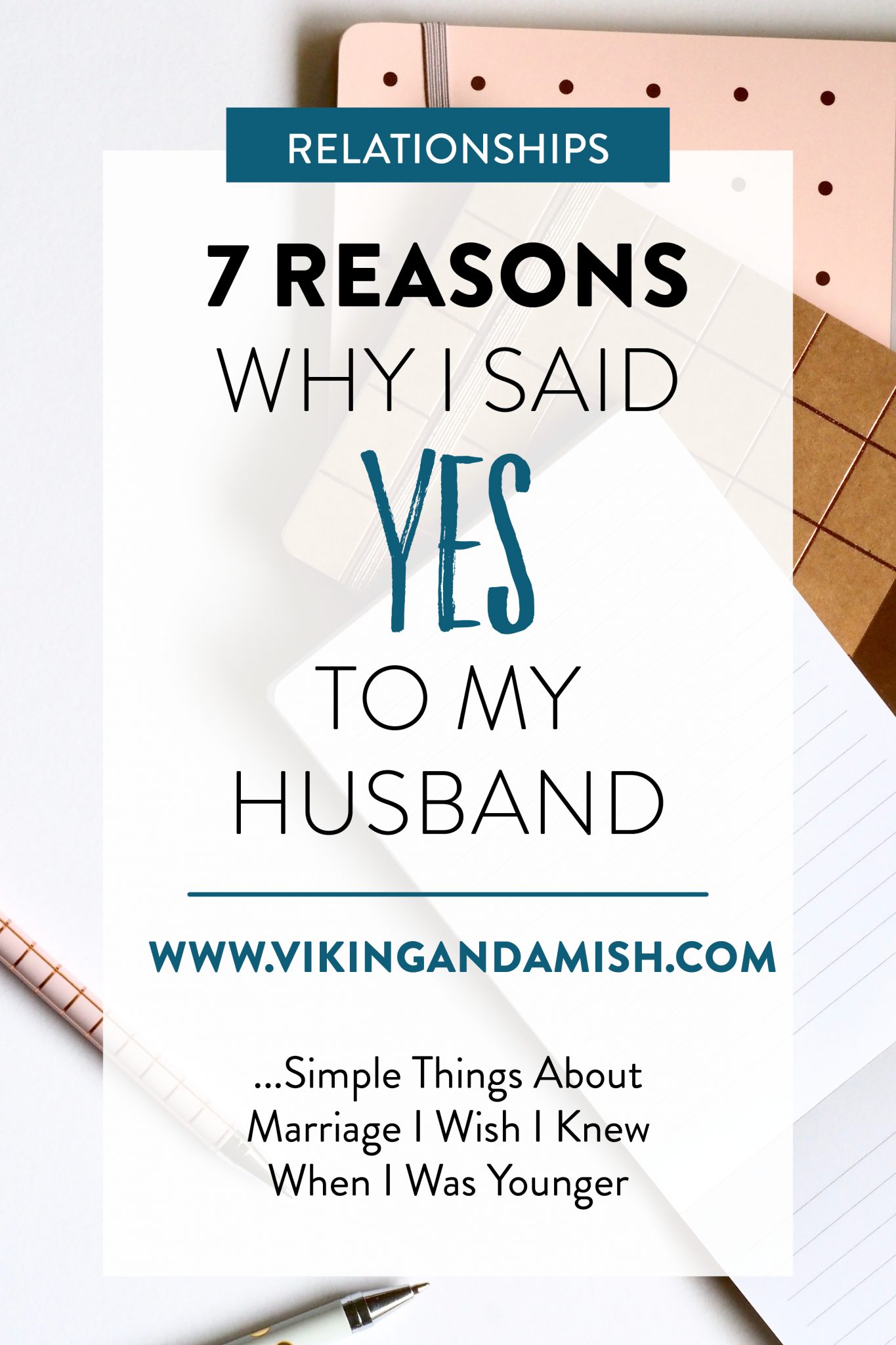 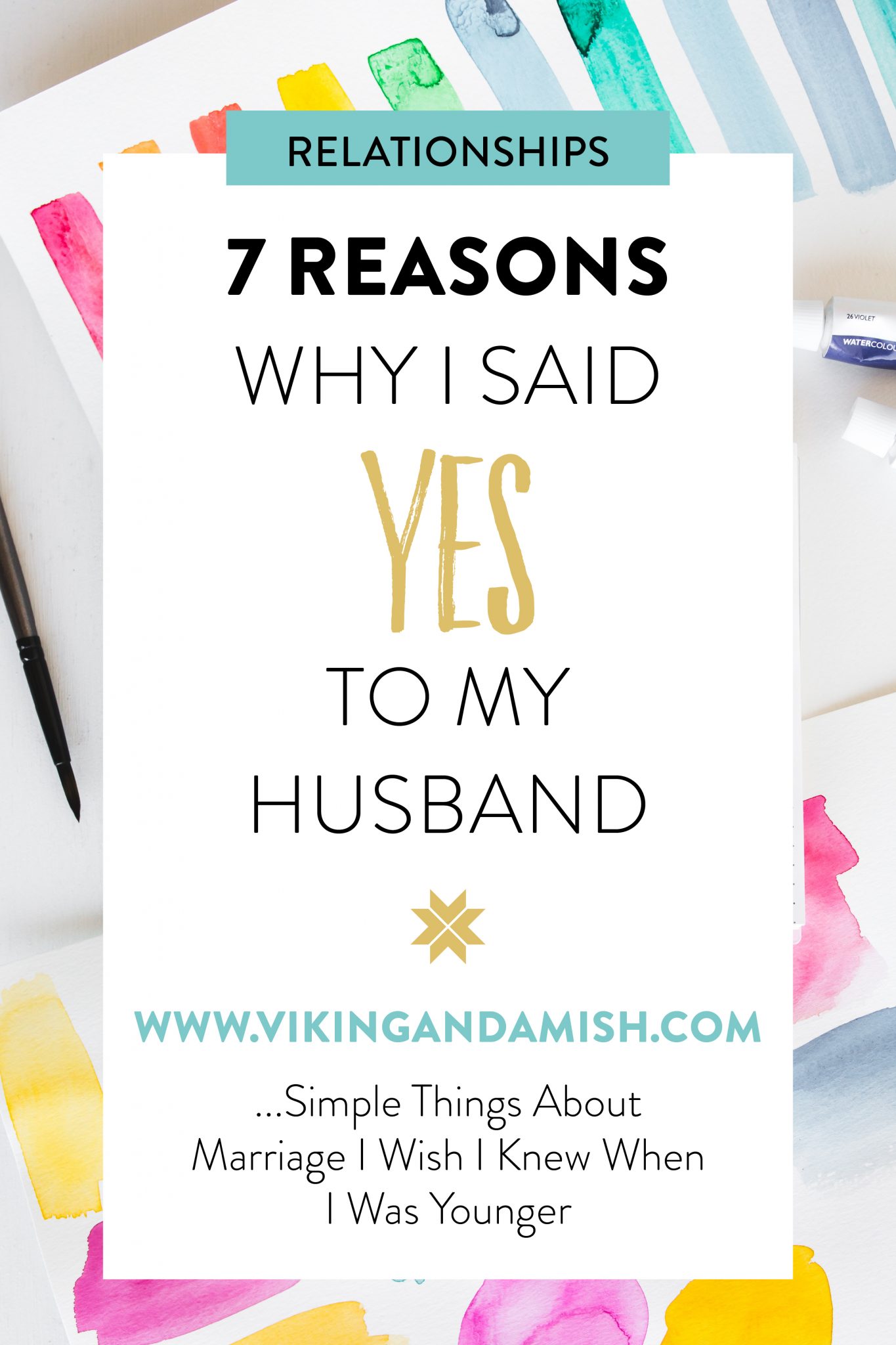